Yim Yam and the Monrak Transistor

Ok ... its been quite a weekend!! So much to catch up on that I'm tempted to do it all in point form ... but lets just press on.

We'll start with the discoverty of a new casual eaterie ... which is always good fun!! I've been curious about Yim Yam for such a long time ... mainly because its billed as serving both Thai as well as Laotian cuisine. I've always been curious about Laotian food, not the watered down version that caters to the western palate (and lets face it ... it makes good commercial sense!), but what the true Laotians eat when they crave some home comforts ... the kind Lu et al ate for lunch at Red Robin ... the food the rest of the Europeans turned their noses up at .. that curious scent of the top notes of chilli mixed with the dubious whiff of fermentation which for these south east asian olfactory cells it simply spells Hea-Ven!! 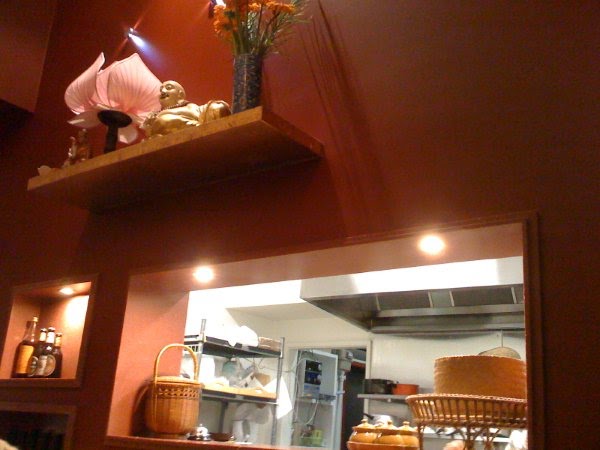 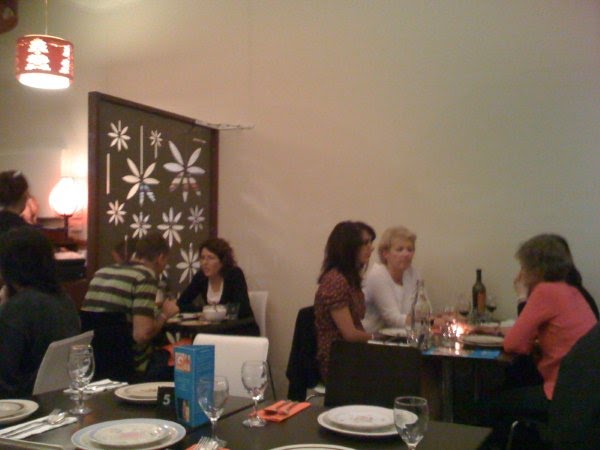 Admittedly Yim Yam for my tastes could have just been that little bit more Lao, as the menu was overrun by your usual thai staples. However! Prices are relatively cheap and the servings huge. More importantly, concensions are not made for the non-asian palatte ... and if a dish is denoted by three red chillies representing heat, then you're getting exactly what it says on the tin ... exhibit A ... my starter ... 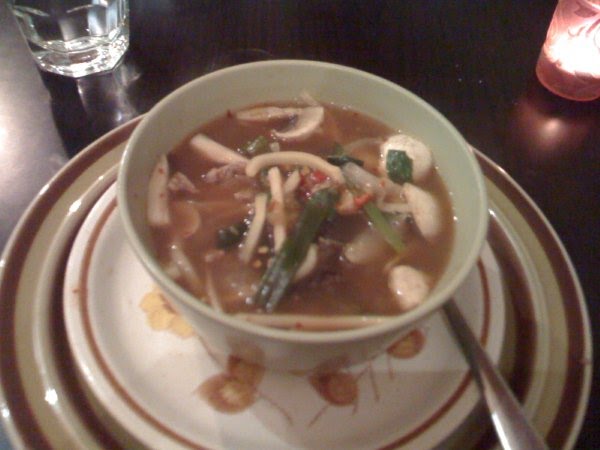 Tom Saap (beef soup) - tender beef pieces in a broth flavoured with tamarind and lemongrass
The soup had a fair bit of bamboo shoot in it ... which usually is a turn off for me ... but it did actually add to the flavour in a good way. And of course the mushrooms as well. It did singe a few nose hairs and probably scraped an entire layer off the insides of my mouth and throat .. but it was so so good!

M had the old Tom Yum with just mushroom which was a little more than pedestrian and equally fiery ... he washed it down with some Lao beer which tasted pretty nice ... 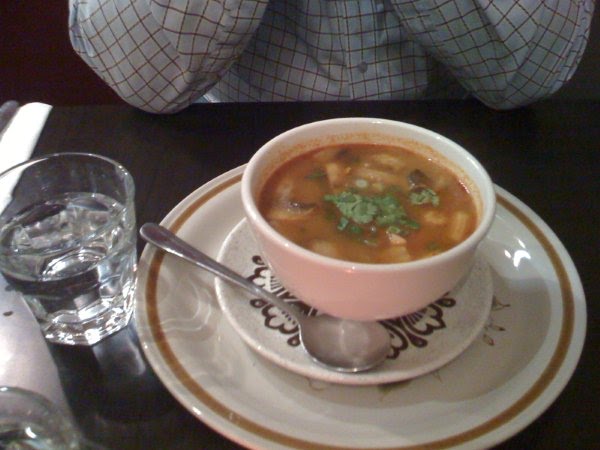 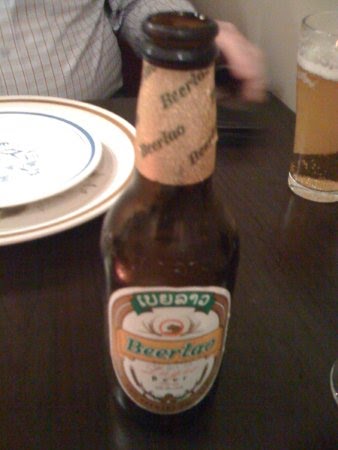 As you can see the crockery comes from the golden nostalgia collection at your local Salvos ... but it was kinda endearing that they paired it all up so fearlessly ... 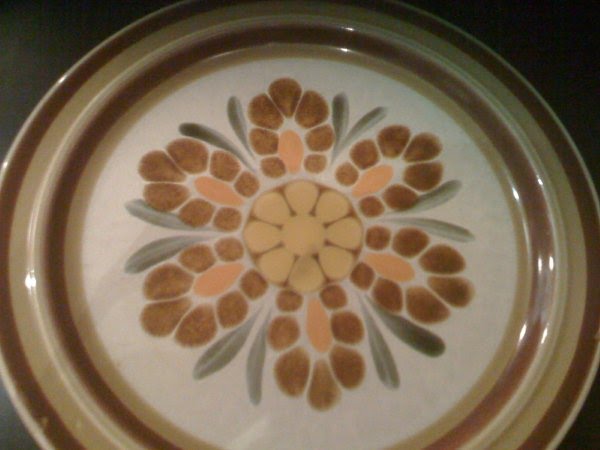 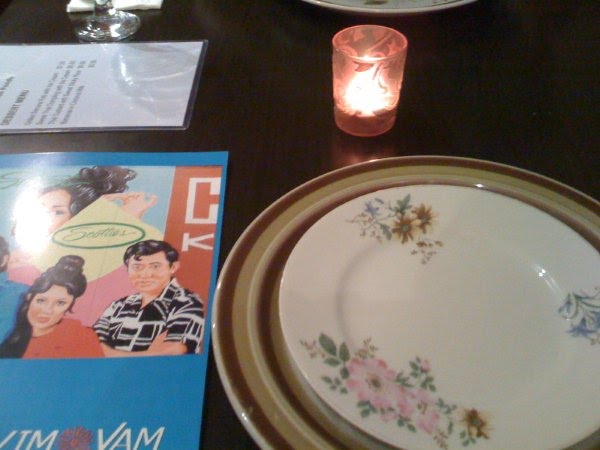 The menu itself gave us a chuckle with its 60s movie poster which was also replicated on the wall in a massive piece of canvas ... and just to follow on the theme ... they projected the Thai movie Monruk Transistor (not exactly one for the kiddies!!) on the wall ... 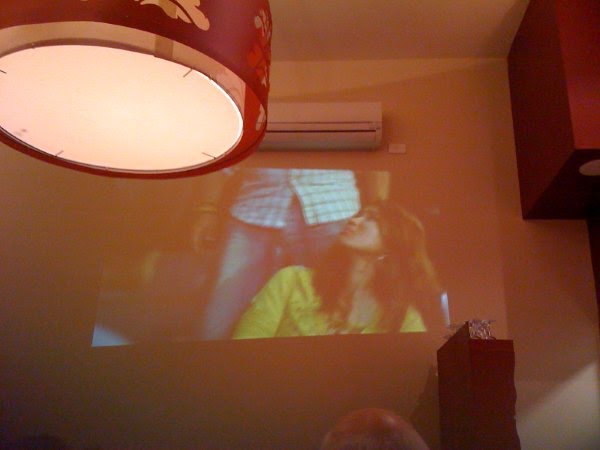 Moving onto the mains, we went for dishes that were unfamiliar on paper, although the flavours were not entirely new. 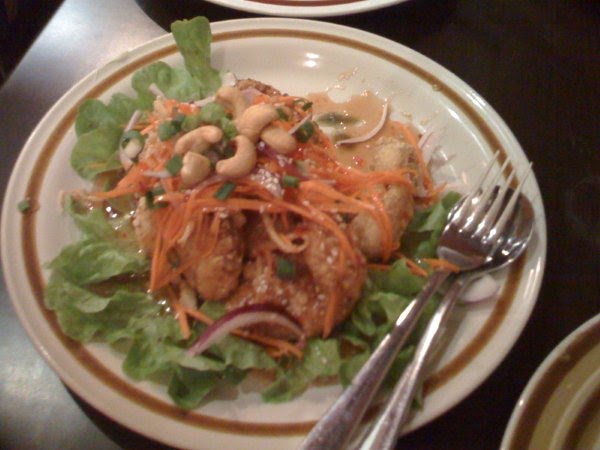 Despite the heavy drizzle of sweet chilli sauce and nothing resembling peanut sauce of any description, this was actually pretty tasty, "I could have had an extra serve" tasty.

We teamed this with Chicken Ferung - ginger, bacon and chicken stirfried with Mekong Whisky: 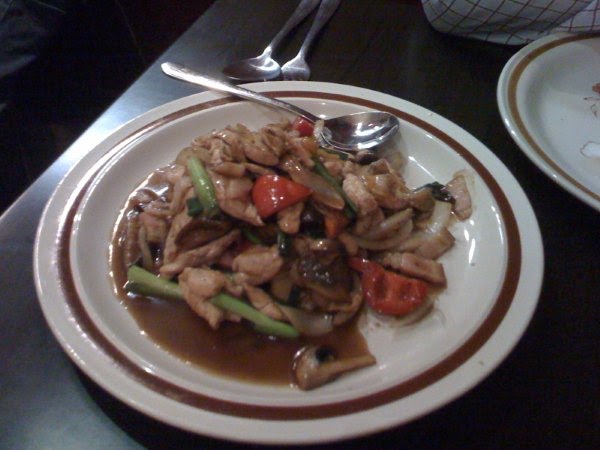 This was a little on the sweetish side, and only a slight hint of the breath of the whisky rounding up the flavours ... but it worked well with the sticky rice we ordered (tad on the tough side) which came wrapped in plastic in a little woven basket: 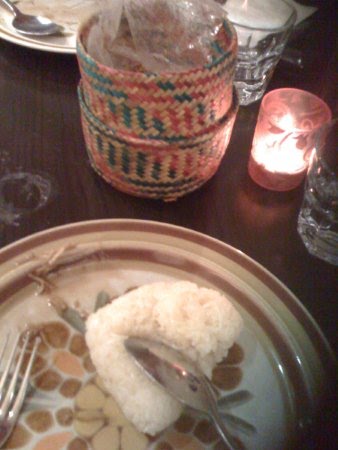 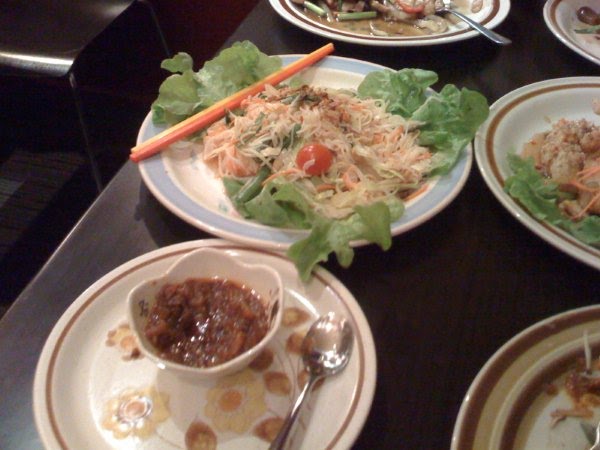 This for me was a total success, just the right amount of tanginess ... although I would have liked a bit more green papaya. We asked for a traditional chilli sauce ... and was given a mild prawny paste a bit like the burmese belachong ... nice but they could have turned up the heat a little.

After such a fucked up week, it was the best way for us to wind down. It was giggles all the way home in the car ... and surely that has got to be the best testament for a restaurant, its ambience and its food!

You can read Matt Preston's review of the Yarraville branch here.