Oh Em Gee! Hanging out with a pro at Wonderbao!

Ok ... I think I'm too old to fangirl, but if I wasn't, I'd be like a tweenie at his first Vidcon in line to meet his favourite youtuber!! And if that sentence made absolutely no sense to you, count your blessings and stop praying so hard as hope has returned to the human race.

I am taking a bit of poetic licence here as I have met this lovely gentleman before, but it was great to see Fatboo of the wonderful Lets Get Fat Together blog in action.

After slyly positing myself as a potential new brunch buddy, I was surprised to see an email in my yahoo suggesting a time and place! Wonderbao was mooted as a possible venue and I concurred having not sampled this particular brand of foodchain fusion. 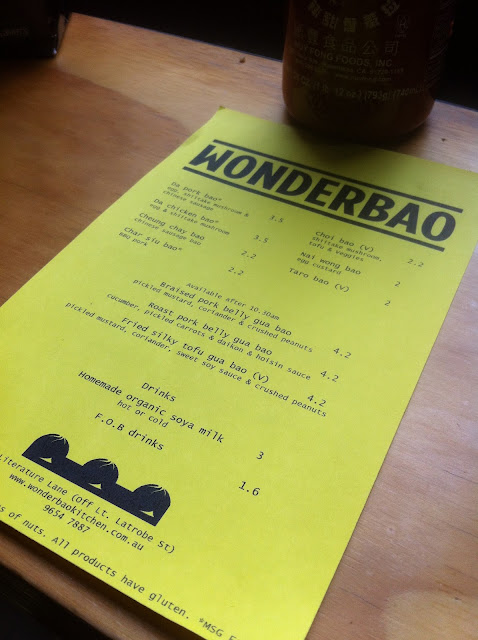 Please note this isn't your standard Yum Cha Char Siu Bao simply split in 2 ... just in case you were wondering. The Bao in Wonderbao actually refers to Gua Bao, a dish that I didn't think would be something the Western palate would take to, considering that the stewed pork belly filling can be a tad porky and that the scent and hit of the preserved vegetables could also be a little too confronting.

But considering that this is another venture riding the Melbourne blink-and-you-miss-it-down-an-alleyway-with-food-truck-in-tow train, things are suitably modified for mass consumption. In other words, the standard Braised Pork Belly Gua Bao ($3.80) is a sweeter offering to its traditional counterpart, and easily the best of the bunch of three ... of which we had said Braised Pork, Roast Pork Belly ($3.80) and the Fried Silky Tofu ($3.80). 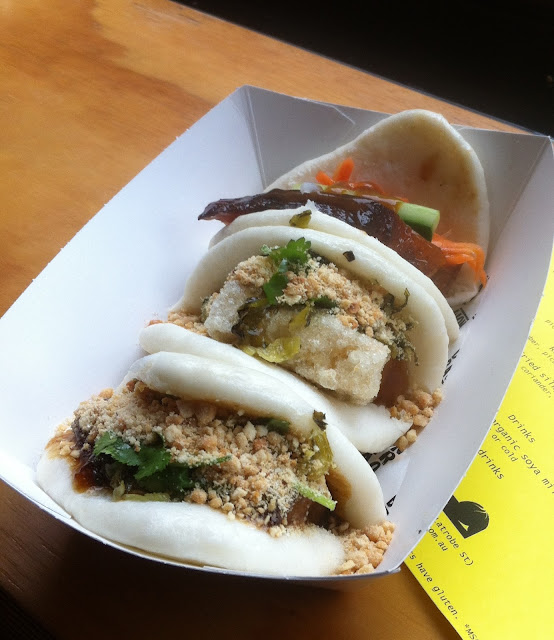 These are 2 bite numbers so don't even bother if you're just going to order the one. Me and Fatboo shared the lot and also ordered hot homemade Soya Milk ($2.80) for liquid refreshment. 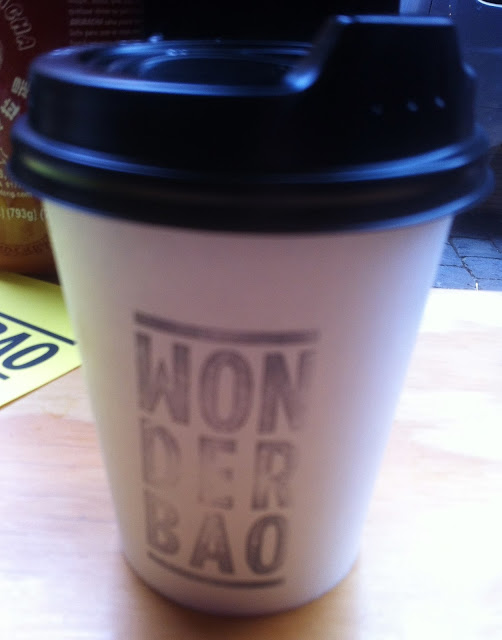 Served in a take away coffee cup that first sip transported me back to my old primary school days, paying 10 cents for a glass at the tuckshop drinks stall during recess. It helped that both Fatboo and I share the same cultural background and ethos. In fact we discovered so many confluxes of taste and ideas that its likely true what they say about shared cultural genes, or great minds thinking alike if you may ... or fuck it whatever adage you wish to insert here at this stage.

So great minds thought their way onto ordering the sweet versions of Wonderbao's ... erm ... baos. We opted to share the Nai Wang Bao (egg custard) and the Taro Bao, both $1.70 a pop. 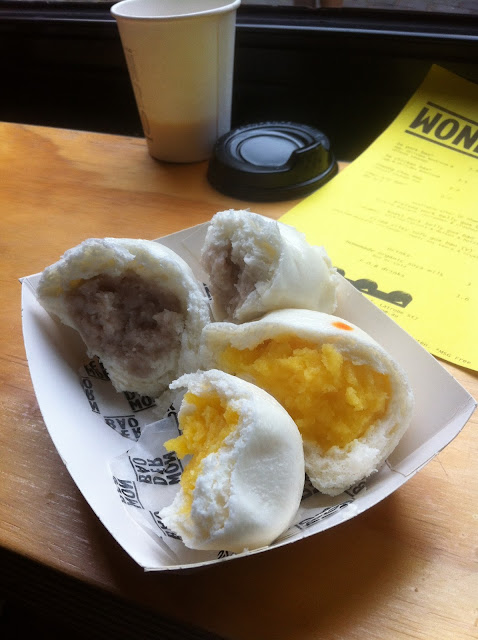 The egg custard bao is pretty much what you would expect any pastry with egg custard in it ... awesome! Although I must say that this type of bao does benefit from being served directly from a steaming basket at Yum Cha - i.e. best served warm, as opposed to lukewarm.

The Taro Bao was like eating Bubur Cha Cha in a bun ... yummy! By the way Bubur Cha Cha is not that hard to make ... and you can certainly find the ingredients in a number of Asian provision shops these days.

So what's my final take on Wonderbao ... well, I enjoyed it,  and the company certainly added to the experience. And if it was a little bit closer to my work, I would probably visit this place more often. Its the sort of snack sized meal I like for lunch. And at the end of the day, its fun and full of flavour. And I think that's what Wonderbao is really all about.

Oh and the Yeo's packet drinks in the fridge are listed on the menu as F.O.B. drinks ... bless! Maybe that should read as PNG drinks from now on. (Totally Inappropriate Temasek!)