Ok ... yes I know, you can see the tumbleweeds on the blog blowing through empty pages as the days drag on ... but let me try and put this to right ... slowly.

I haven't been suitably inspired to blog about anything much really until yesterdays CBA Friday's dinner at Co Thu Quan (Aunty Thu's Restaurant), over in the Little Saigon Market in downtown Footscray. 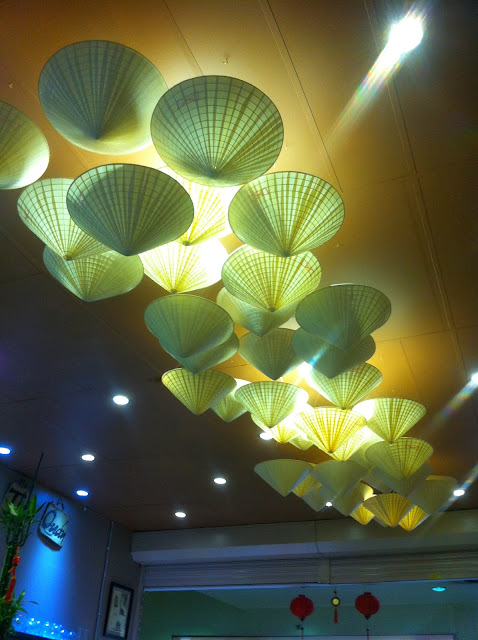 Only a month old and already packing in the crowds, our lovely waitress showed us to a table and said the words that every foodie longs to hear which is there's nothing like this anywhere in Melbourne - oh hun, Sold!! 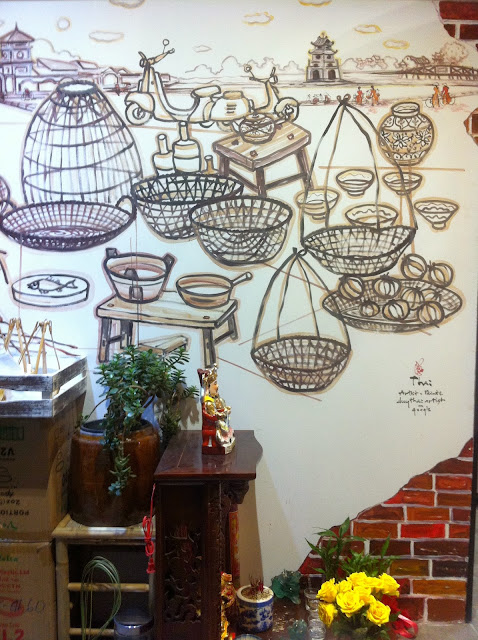 Handing us the menu with a short and sweet list of Vietnamese street food, she pointed out the Banh Trang Tron as their signature dish, a sort of rice paper salad with green mango, which is sold in clear plastic bags as a takeaway lunch, very cute! 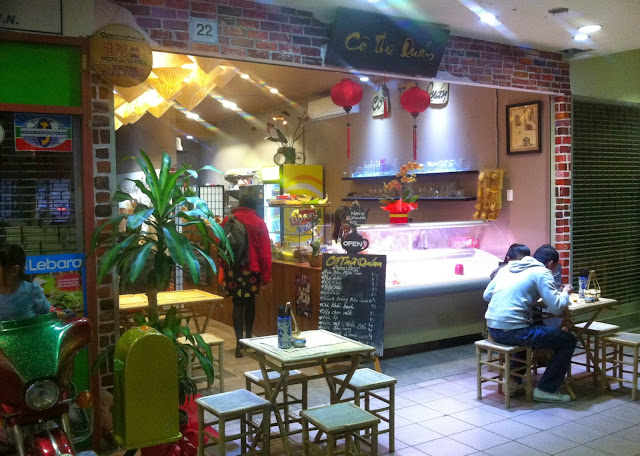 She was extremely patient with all of our questions, and made us feel comfortable and energised by her quiet enthusiasm, which was the perfect tonic for our frazzled nerves after having such a ratshit day at our respective jobs.

We were also excited by the presence of Kalamansi lime on the menu, including Kalamansi Lime Juice, which we promptly ordered. Kalamansi Lime is the holy grail for Temasek68 & co, and to date we have yet to encounter this amazing citrus fruit in Melbourne, at least not in the exact genus I grew up with. Co Thu Quan's version comes in this cute little round glass, and is jammed pack with preserved lime rind, but its not quite the kalamansi flavour we were hoping for. Thats not to say it wasn't good, but the preserved lime does add a tad too much saltiness to the mix, so it comes across tasting a bit like one of those sports drinks, which if you're in the mood for it, can be quite refreshing. 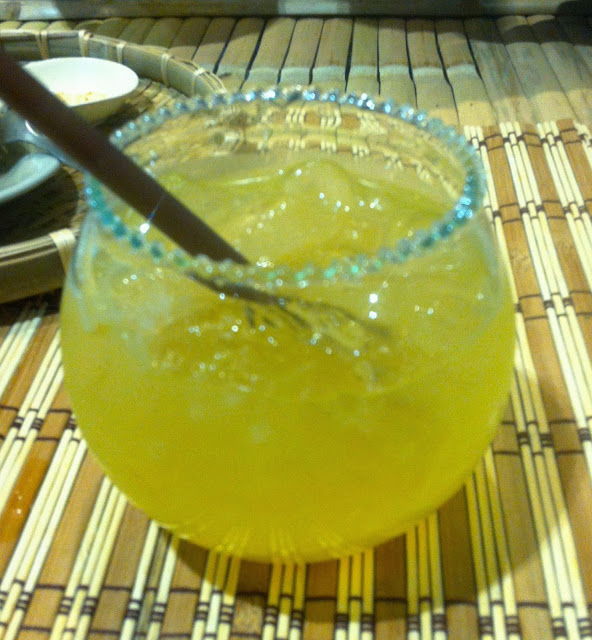 Most of the dishes are priced between $5 to $10 and the portions are perfect for a shared type meal - sort of a vietnamese tapas, if you will. We were tempted to literally just work our way through the entire list, but common sense reigned and we selected 4 to sample and then a sweet each.

After placing our orders, the food came out in almost too quick succession, starting with a glutinous rice ball filled with a bean paste and pork (I think) served with a dipping "sauce" of sesame seeds. I didn't take note of the name in Vietnamese, but whatever language you would like to call this, they should all mean delicious. Because that was exactly what it was. The flavour and texture was familiar yet different with the sesame seeds being a masterstroke of the entire eating experience. So those welcoming words were not just a PR soundbite; with that first mouthful we knew we were in for a special treat. 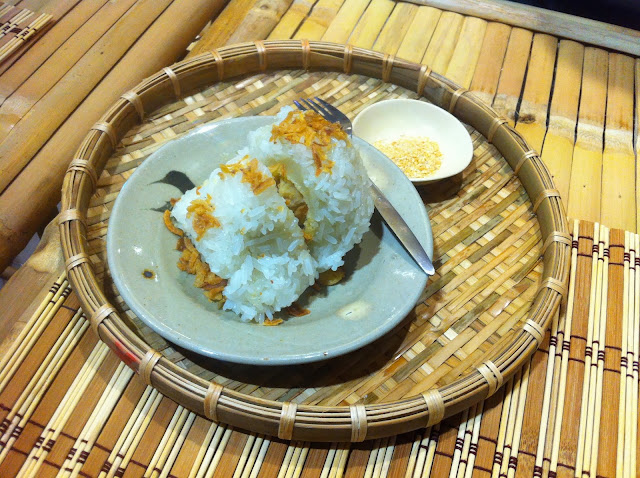 Next up was the Banh Trang Bo - Fried Shallot, butter, Vietnamese pork pemmican (i.e. fat concentrate) in a rice paper wrapper - these were the very definition of the perfect beer snack. The pork floss in these lightly crisp rice paper parcels was delicious and moreish - just crying out for an ice cold hop. M said that next time we were ordering 2 serves, one each ... trust me thats not being greedy, its simply being practical. 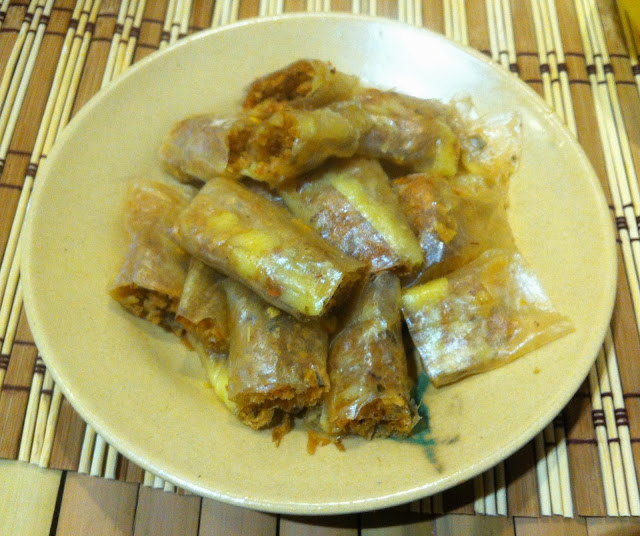 Next up was the Bap Xao which was spicy corn served with dried prawns. Another winner of a dish. Corn with dried prawns is a revelation, and something I'm eager to experiment with at home. I did think that it could have used a garnish of some kind of pungent herb (like vietnamese mint or Thai basil) as a counterpoint to the richness of the corn. I believe it had spring onion in the mix. 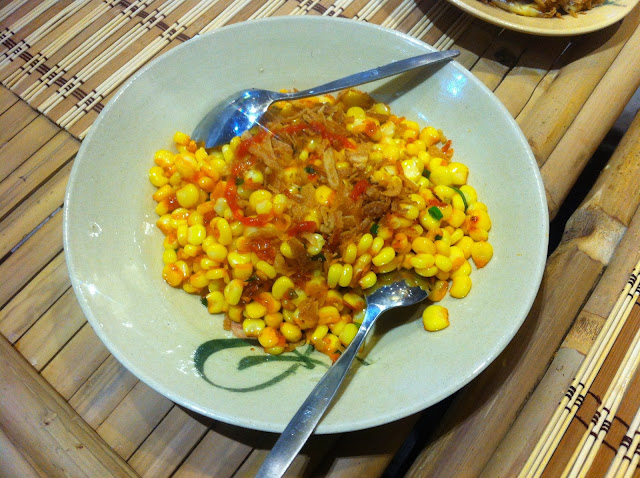 Finally, our last savoury was the aforementioned Banh Trang Tron, billed as a Rice Paper Salad consisting of Green Mango, beef jerky (watch this become the ingredient du jour), quail egg, dried shrimp, peanuts and vietnamese mint. You are encouraged to mix it all up before diving in. Be warned, the rice paper tends to stick so you'll probably need hands and chopsticks to pry the pieces apart. This actually tasted like a dry version of home cooked Mee Siam. I don't how or why, but again it was something unfamiliar yet so very nostalgic. (and I'm kicking myself for not having taken a photo!)


Having had our arms twisted ever so gently by our lovely waitress, we conceded to ordering a serve each of the two desserts on offer. M had the Sua Chua Mit - which was essentially Jackfruit yoghurt, sadly one of the few tropical fruits I do not like. And I had the Almond Panna Cotta in lychee syrup,

M's dish was amazingly pretty with the yellow of the jackfruit and the pink of the Dragon fruit puree. Visually enticing, M corroborated on its flavour. 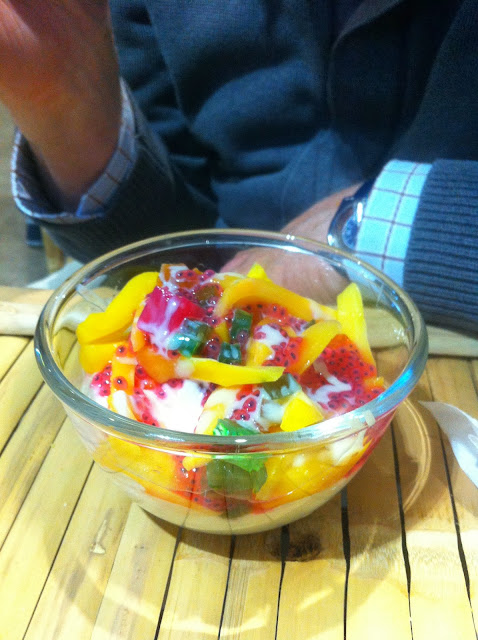 My panna cotta wasn't entirely successful in my opinion as the agar like cubes were a little lacking in flavour, and I know its traditionally served like this, but I'm not a fan of having ice cubes in a dish. Still its been a long time since I've had lychee syrup in anything, so I did enjoy that aspect most of all. And the toasted almond flakes worked well in the mix. 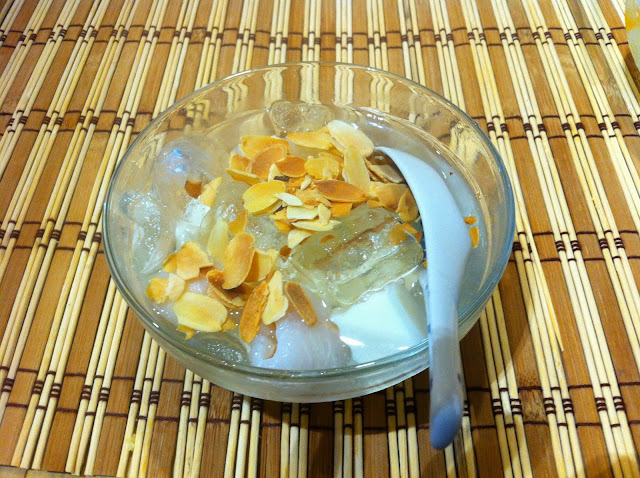 I think this joint is the new wave of gentrification happening in the Western suburbs - let the other places have their white walled blonde wood brunchers, we'll have our street food cafes thank you very much! Check out Cu Thu Quan quicksmart people.

Email ThisBlogThis!Share to TwitterShare to FacebookShare to Pinterest
Labels: Food;